Until the end of the 18th century, mineralogists used almost exclusively the laboratory techniques of chemistry. This changed drastically with the invention of the goniometer and the polarizing microscope. The development of mineralogy and crystallography largely depended on these two instruments. Their importance declined with the discovery of the diffraction of X-rays by crystals (1912) and its practical application in both sciences over the course of the 20th century.

The invention of the goniometer (illustrated in a separate collection of the Virtual Museum) initiated a period of major advancements in the mineralogical and crystallographic sciences. 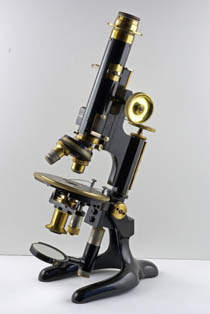 The polarizing microscope and optical instruments such as polariscopes, dichroscopes, refractometers, and the axial angle apparatus, appeared in the 19th century. They not only aided the understanding of crystal optics, but also led to the advancement of quantitative mineralogy. In the early 19th century (Haüy, 1817) instrumental optical techniques were also introduced in the testing of cut and polished gemstones.
To this day, the polarizing microscope remains a useful tool in mineralogical laboratories. The early, often elegantly constructed polarizing microscopes and their countless and ingenious auxiliary accessories are highly sought after by collectors.

Past the mid-19th century, the apparition of the Bunsen burner and the improved technology to produce better quality glass for prisms opened the way to spectroscopy. This technique, then known as spectrochemical analysis, repaced the blowpipe method for element identification. A number of types of spectroscopes, from small pocket-sized devices to highly sophisticated and accurate instruments, were made by a large number of instrument makers across Europe. Spectroscopy underwent a fundamental change with the invention of the mass spectrograph by Thomson and Aston in 1919. 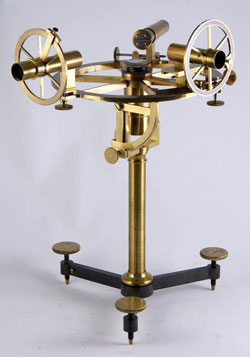