As early as 1669 Niels Stensen proved the constancy of interplanar angles in quartz crystals. Yet it took more than a century before it was recognized that this property holds for all crystals and not just quartz. It was Jean Baptiste Louis de Romé de l’Isle (1736-1790) who generalized this fundamental law of crystallography, known today as "Steno's law".

Actually this property was incidentally discovered by de l'Isle's assistant, Arnould Carrangeot, while making terra cotta models of the crystals in de l'Isle's collection. For this purpose, in 1780 he developed a simple instrument to measure the angles between crystal faces. The instrument that came to be as the "application goniometer" or "contact goniometer" was nothing more than two limbs connected by a joint. The limbs could be applied to two adjacent crystal faces and finally the angle between the limbs could be measured. The accuracy of the contact goniometer was about 15' at best. 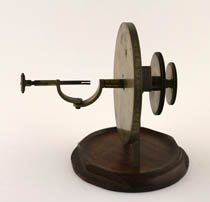 In 1809, Wollaston developed an optical goniometer where the reflection of light was used to precisely position a set of crystal faces belonging to one crystallographic zone. For this purpose the crystal was mounted on a rotatable horizontal axis. This axis was connected to a graduated circle. The crystal was positioned such that a zone axis (and as such the edge between two adjacent crystal faces belonging to that zone) was parallel to the rotational axis of the graduated circle. Upon rotation of the circle, the crystal faces to be measured reflected the light from a source located at a great distance, in certain angular positions. As such the angle between the normals to the respective crystal faces could be measured. This instrument, known as the "Wollaston goniometer" or "Wollaston reflecting goniometer", allowed accuracies down to 5' to be obtained.

Later, a mirror was added to improve the positioning of the reflections from the crystal faces. This could also be achieved by means of a low power observation telescope and measurements to accuracy of 1' could be made. In 1843, Mitscherlich introduced a high-precision goniometer with a vertical circle and a telescope firmly attached to the base of the instrument; a variety of Mitscherlich-type goniometers of increasing complexity were produced over the years.
In the Virtual Museum Wollaston- and Mitscherlich-type goniometers are classified under the group "vertical circle goniometers". 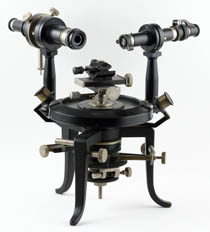 The main drawback of single-circle instruments was that they could only measure the faces of one zone at a time. To measure the faces of another zone, the crystal had to be detached, remounted and measured again and this process had to be repeated several times in order to obtain a complete measurement of the entire crystal.
The English crystallographer W.H. Miller was the first, in 1874, to use a goniometer with two circles and thus overcoming the problem of mounting the crystal over and over. The original posthumous publication of 1882 apparently attracted little attention and his method was independently rediscovered by Fedorov (1889), Goldschmidt (1893) and Czapski (1893). The principle of these instruments was that the crystal was mounted on an axis which in turn was mounted on another axis perpendicular to the first. As such the position of several crystal faces could be measured one after the other and the angular positions (phi and rho) plotted on a Wulff net. These instruments were called "two-circle goniometers", "theodolite goniometers", "Goldschmidt goniometers".

To overcome certain indexing problems, three circle instruments were developed at the end of the 19th century. Because they were very expensive and complicated to adjust, they only found very limited use. 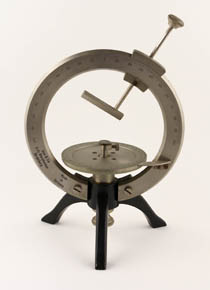 In 1896, Goldschmidt also invented a two-circle contact goniometer. This instrument was suited to measure larger crystals than with the equivalent optical goniometer.

After 1900 the development of the goniometer slowed down, mainly because x-ray-diffraction made his entrée in crystallography. In the first half of the 20th century some major improvements to goniometers were still made by Terpstra in the Netherlands and Codd and Moore in England. Today goniometers are definitively moved to the gallery of historical instruments as witnesses of the historical development of mineralogy and crystallography. Therefore the Virtual Museum also holds some of these 20th century instruments in its collection.

(only bibliographies that give detailed descriptions are listed here) 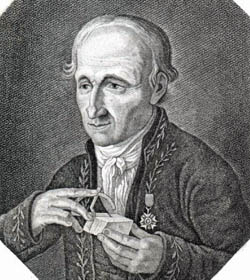