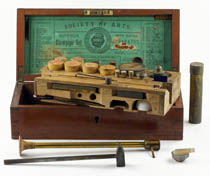 An instrument that played an important role in 19th-century mineralogy was the blowpipe. Its contribution to qualitative chemical analysis of minerals, from the late 18th century to the mid-19th century, was enormous. Various instrument models and kits for blowpipe analysis (sometimes with implements for quantitative analysis) were developed by leading scientists and offered by various manufacturers. Due to the high demand, a large number of blowpipe sets was produced and therefore many have been preserved.

During the 19th century, various physical techniques made their appearance in mineralogical laboratories. These include equipment for testing magnetic properties of minerals, as well as balances and areometers for measuring the specific gravity. From the introduction of the hardness scale by Mohs (1812), the scratch test has been used to aid mineral determination. Sclerometers were developed for more accurate hardness determinations. 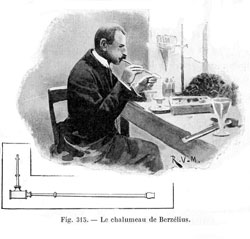