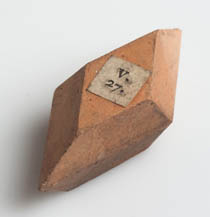 The first real collections of crystal models were produced by Romé de l'Isle. He even offered sets of small (ca 3 cm) models made of "terra cotta" to stimulate sales of the expensive 4 volume set of his book "Cristallographie" (1783). The models were manufactured by his collaborators Arnould Carangeot, Lhermina and Swebach-Desfontaines, who produced numerous large sets (up to 448 models in each set). To precisely transfer interplanar angles of natural crystals to the terra cotta models, Carangeot invented and designed a prototype contact goniometer. This instrument, which proved to be an indispensable tool in geometric crystallography, made it possible to measure interplanar angles with an accuracy of about half a degree. 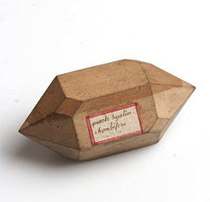 Nearly two decades later, René Just Haüy introduced wooden crystal models to illustrate the two-dimensional drawings in the atlas volume of his "Traité de Minéralogie" (1801). For the production of crystal models, wood turned out to be much more convenient than clay. Pear wood in particuar made it possible to obtain smooth faces, sharp edges and precise dihedral angles necessary for the production of these three-dimensional objects. In general, the angular accuracy was very high and some models, especially those illustrating crystal twins and Haüy's figures of decrement, still appear as masterpieces of fine woodwork and carving. Skilled craftsmen like Pleuvin, Beloeuf and Lambotin (to name a few) became specialists in this field and the models they offered were highly esteemed.

After their introduction by Romé de l'Isle and Haüy, crystal models were increasingly in demand by scholars for educational purposes as well as mineral collectors. The quality of the models improved due to the technical progress in their production. Several mineralogists and crystallographers began to design their own series of models. Although pear wood held a prominent place, models were also made with materials such as plaster, cast iron, lead, brass, glass, porcelain, cardboard, etc.

In 1833, Adam August Krantz (who studied pharmacy and later "Geognosie" at the "Bergakademie Freiberg") founded the "Krantz" company in Bonn. Four years later, Krantz moved to Berlin and sold minerals, fossils, rocks and in fact acquired a monopoly in the production of crystal models made of pear wood or walnut. Ever since its foundation, the company has always been in contact with renowned scientists and important collectors. Therefore, in 1880, Krantz proposed a series of 743 pearwood models compiled for educational purposes by the crystallographer Paul Groth. Seven years later, an additional collection of 213 models was available. 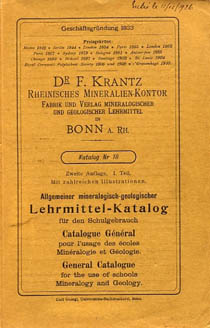 At the beginning of the 20th century, Friedrich Krantz (a nephew of August Krantz, with a degree in mineralogy) supported by his teacher, the crystallographer Carl Hintze, offered a collection of 928 models, including most of the Groth models. Later, along with many other productions, a Dana collection of 282 models was manufactured. Krantz offered a choice of collections of wooden models in different sizes (5, 10, 15-25 cm). In addition, he sold a variety of glass models with the crystallographic axes illustrated by colored silk threads or with the holohedral form made of cardboard inside. There were also models in solid cut and polished glass (colored and uncolored), cardboard models, wire crystal models, crystal lattice models, models with rotating parts, etc.

Over the years, Krantz published numerous detailed catalogs of the collections he offered; they are precious documentation.

In 1994, Ulrich Burchard edited detailed drawings (generated by means of the program "SHAPE") of the models of the Groth and Krantz main collection indicating the original stamped numbering. Two years later, the same author described the supplementary series along with an alphabetical list of all mineral species in both collections. The two volumes devoted to this collection provide invaluable documentation for the collector to appreciate, compare and identify these fascinating objects. 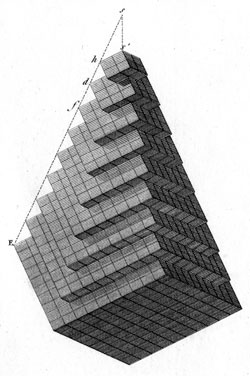